Imagine yourself at night, wearing dark clothing and holding a six-foot stick lined with LED lights. As you turn on the stick, it looks like a rainbow light saber. A nearby friend with a camera gives you a cue and you start walking with the LED stick. The result, when you edit the image later, looks like a lit-up ribbon floating in the streets. This new product called the pixelstick, developed by Bitbanger Labs, is like a more advanced version of light painting, the process in which you use long-exposure photography to capture the movement of light.

Housed by an aluminum body, the stick runs on 8 AA batteries. Your SD card is read by its controller box with buttons that acts like the pixelstick’s brain. Before heading out to the streets, you simply choose an image, open it in Photoshop and then save it to your SD card. One line at a time, pixelstick reveals the images that you pre-loaded on the card through its 198 RGB LED lights. The wand then creates this image through the LED lights and you capture the magic on your camera. Users just need to wear black or dark clothing so they don’t appear in the frame. 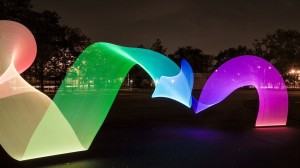 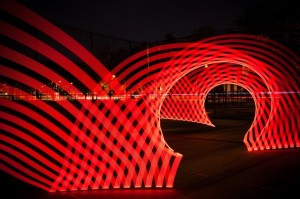 If this doesn’t inspire swellness…I don’t know what does. All I know is that I want one!